Anderson’s Education of Blacks in the South 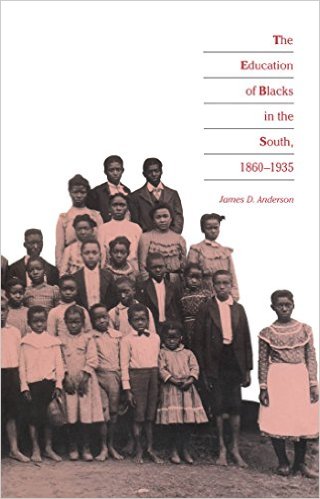 During our monthly faculty seminars, we are examining key works of the African American experience. Our book list contains a list of shared readings that all faculty participants will read and discuss as we continue our study together.

The focus of our February seminar was an examination of Anderson’s Education of Blacks in the South: 1865-1935. Ivie Ero led the discussion of Chapter 1 (“Ex-Slaves and the Rise of Universal Education in the South, 1860-1880”) which highlighted the degree to which former slaves took agency for their own education, leading to a 94% literacy rate following the Civil War (later falling as planters began to put up roadblocks to education after Reconstruction). Apryl Trimble prepared notes in her absence for Chapter 2 (“The Hampton Model of Normal School Industrial Education, 1868-1915”), which provided the basis for Industrial education. Discussion centered around the problematic views of Samuel Armstrong, as well as Hampton’s role in pushing an industrial model. Chapter 3 (“Education and the Race Problem in the New South: The Struggle for Ideological Hegemony”) was led by Sharon Melton. Sharon highlighted the growing role of Northern philanthropists, as well as the Southern Education Board and the General Education Board, in Black education. Dan Fuller led a discussion of Chapter 4 (“Normal Schools and County Training Schools: Educating the South’s Black Teaching Force, 1900-1915”). The great shortage of classrooms and teachers was seen as an opportunity by industrialists to shape both the form and content of training programs in the South. Chapter 5 (“Common Schools for Black Children: The Second Crusade, 1900-1935”) was led by Bobby Cooper, who connected some of his personal experiences with schools in Bolton, MS with the chapter. Jean Greene rounded out our discussion of Chapter 6 (“The Black Public High School and the Reproduction of Caste in the Urban South, 1880-1935”).