As part of the grant, we are bringing in visiting scholars to work with our team to help develop our course materials and background. Our first two visiting scholars are Dr. William Andrews from UNC-Chapel Hill and Dr. Kristi Melancon from Mississippi College. 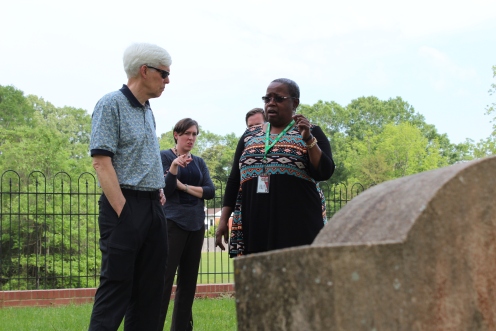 Visiting the Holtzclaw cemetery on campus 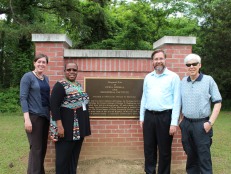 Kristi, Jean, Dan, and Bill at the original site of the Holtzclaw Institute.

Kristi sharing information on the Black press with the team

We had a great initial visit with both Bill and Kristi.

Bill Andrews provided an introductory lecture on African American autobiography, which was helpful both in terms of grounding our study of Black Man’s Burden, but also as something we can share with our students in the fall. When working with his students, he starts by explaining the term autobiography itself and its 3 greek roots: autos (self) bios (life) graphie (writing) as self-life writing. He discussed the first autobiography – Miss Mary Rowlandson’s 1602 work. He used the example of the popularity of Benjamin Franklin’s autobiography of 1818 to show that type of work predates the novel by a considerable period (50 years before any time of fiction; 100 years before AA novels). Slave narratives were predominant before 1865. Jurrinda Lee autobiography (1833) and the 1825 Life of William Grimes the runaway slave, written by himself. That phrase, “written by himself” is key because it shows what black writers had to write against – questions which white writers were able to take for granted. AA autobiographers had to do the following: 1) How to prove I have a self? 2) How to prove you have a life? 3) challenge assumption that there was no graphie, no writing (although many learned to write). [note connection back to his discussion of the 3 greek roots.]

Kristi’s session on the Black press focused on the example of her work with the press in New Orleans. She mentioned the huge growth in the press after the Civil War and its connection to AA literacy. Gary Nash’s work on subjects vs actors in AA studies was mentioned. Kristi suggested that the press is important to look at how they shape the future, not just how they represent the past. Elizabeth McHenry’s Forgotten Readers discussed “invisible” literary practices. She suggested a PBS documentary series for use in-class, perhaps as a movie night: The Black Press: Soldiers Without Swords.

The second half of her talk was focused on methods of teaching newspaper analysis with students. Using the mantra of Available, Accessible, and Affordable, she suggested resources such as AA Newspapers database. Stratified Random Sampling was demonstrated as a method of analysis (from Riffe, Analyzing Media Messages). Have students code a text with highlighters (education, gender, political, etc). She also demonstrated a project idea using Interactive Timeline from Knight Labs. Kristi provided a sample syllabus for her dream class on the Black press, which is full of useful resources as well